Having had a few days to physically recover, spiritually decompress, and emotionally reconnect with my family, I have reflected on my India #11 Mission Trip. 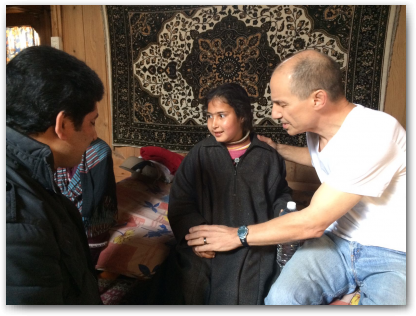 For me, this was the most challenging, yet the most rewarding trip that I have taken. The days and nights were brutal: Medical camps during the day, train rides by night to the next location. This was the first week!

Beginning the second week, we remained based in Jammu in the same place and did Medical campus during the day, and held a three night crusade in the evenings. Then we travelled a bit, had our famous two-mile mountain trek to a remote location for a camp (see previous post). And we still hadn't made the really long journey through the mountains to Srinagar in Kashmir!

That drive was a faith-builder, with hairpin turns, rock slides, heavy rain that turned into snow, narrow passes, and of course the usual assortment of cars, trucks, buses, buffalo, cows, and goats. But after 12 hours we made it (well after our SUV broke down just a few miles from our destination. So myself and the doctors went on ahead to conduct a Medical Camp while the rest of the team awaited repairs). Whew!

The last day in Srinagar was very special. Pastor Daniel and I sent the team back home via vehicle (remember the 12 hour trek mentioned above?) to Jammu to catch a train back to Kazipet. He and I prepared to board a plane back to Hyderabad where I would catch my flight to the US.

On the morning of our departure, the owner of the hotel (more like Motel 6) where we were staying heard that we were a team of Doctors and asked if we'd look at his daughter. She was 14, but at age 6 had endured a botched spinal tap and was physically & mentally challenged. Pastor Daniel indicated that our Doctors had already left for home, but I motioned to him that I wanted to pray for her.

Pastor Daniel wisely told to the owner to come back with his daughter later (when our local Srinagari pastor Kelu - whom I have mentioned on numerous occasions on this Blog - would be with us to "translate"). The real reason was this: This region is heavily Muslim, and we did not want to jeopardize Kelu's influence, but rather would defer to his judgement on if we should pray for her or not. He is constantly targeted for his Christian beliefs, and we did not want to hinder any work he was doing.

When Kelu arrived he spoke with the owner, and felt that it would be alright to proceed with indicating we were Christians and we wanted to pray for the girl. And so we did (see picture above). I am believing that God is healing her and that the family will come to Christ as a result!

For me it was a glorious ending to an incredible trip! Thank you for following!
at March 27, 2014

Praying that God will water every seed you have sown on this trip! Thank you for your sacrifice (comfort, safety, family time), thank you for going!

Thank you Gina. Going to minister in India is so much a part of my life, it is not a sacrifice... It is me.

Praise Jesus. Yes, He was with you all the way in journey. That proves how faithful HE is.
We are praying for you and the ministry. God bless you
JOY DAVID, JANGAON

Thank you Joy David! Yes, the Lord was faithful!

"Last day in Srinagar very special. Pastor Daniel and I had to send the team back home via car (remember the 12-hour trip mentioned above?) To Jammu to catch a train back to Kazipet. Mr. and I was prepared to board the plane back to Hyderabad, where I would catch my flight to America. "it certainly is not a bad trip you, I would love to travel and learn the customs office chemistry of the place or area.

Gahe said...
This comment has been removed by a blog administrator.
3:40 AM

Yepi said...
This comment has been removed by a blog administrator.
2:44 AM

Thank you for such a sweet tutorial - all this time later, I've found it and love the end result. I appreciate the time you spent sharing your skills.
Gamesbx
Manga Kiss
MangaFox

I have read your article, the information you give is very interesting.
Minecraft Download
Minecraft games
Minecraft
Minecraft Pc
Minecraft Unblocked