Do you remember as a kid, lying in the grass and looking up at the clouds, imagining different things from the shapes of the clouds? A whale, a castle, maybe a unicorn. (Do kids do that anymore?)

The Walt Disney Company has a division called Imagineering. It's main function is master planning, creative development and research. It boasts over 150 imagineers, who seek to blend creativity and innovative technological advancements to produce some of the world's most distinctive storytelling.

So what are you imagining these days? Are you using your creativity and even the technological tools that you have at your disposal to tell your story, a story, or perhaps His story?

Are you laying down in the grass and looking up at the clouds, allowing your imagination to work?
at April 29, 2009 No comments:

Stop And Hear The Music 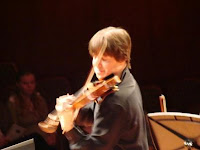 A man sat at a Metro station in Washington DC and started to play the violin; it was a cold January morning. He played six Bach pieces for about 45 minutes. During that time, since it was rush hour, it was calculated that thousands of people went through the station, most of them on their way to work.

Three minutes went by and a middle aged man noticed there was a musician playing. He slowed his pace and stopped for a few seconds and then hurried up to meet his schedule. A minute later, the violinist received his first dollar tip: a woman threw the money in the till and without stopping continued to walk. A few minutes later, someone leaned against the wall to listen to him, but the man looked at his watch and started to walk again. Clearly he was late for work.

The one who paid the most attention was a three year old boy. His mother tugged him along hurried, but the kid stopped to look at the violinist. Finally the mother pushed hard and the child continued to walk turning his head all the time. This action was repeated by several other children. All the parents, without exception, forced them to move on.

In the 45 minutes the musician played, only six people stopped and stayed for a while. About 20 gave him money but continued to walk their normal pace. He collected $32. When he finished playing and silence took over, no one noticed it. No one applauded, nor was there any recognition.

No one knew this but the violinist was Joshua Bell, one of the best musicians in the world. He played one of the most intricate pieces ever written with a violin worth $3.5 million dollars. Two days before his playing in the subway, Joshua Bell sold out at a theater in Boston and the seats average $100.00 each.

This is a real story. Joshua Bell, playing incognito in the Metro station was organized by the Washington Post as part of a social experiment about perception, taste and priorities of people. The outlines were: In a commonplace environment at an inappropriate hour: Do we perceive beauty? Do we stop to appreciate it? Do we recognize the talent in an unexpected context?

I wonder what else we are missing...

Last week I had a conversation with a colleague at the local Starbucks. I came away from our one-hour meeting with a renewed passion for creativity and even a few ideas for a project I was working on. Why? Because we engaged in conversation that drew creativity out of us.

We didn't spend all of our time talking about people or events. Rather, we exchanged ideas which in turn stimulated more ideas and our discussion was ripe with imaginative fruit, ready to be harvested.

I have always encouraged my musician children (two of which are now adults, one is about to be) to surround themselves with singers and musicians who are better then they are. Never be the best person in your band is a mantra I remind them often. Better, more creative players and singers challenge you and stretch you, bringing out from within you things that you didn't know were there.

So where am I going with this? I encourage you to engage in conversations with those who will stimulate your heart and mind to think, create and dream. Watch and ask questions of people who are better than you in your field of art and profession, especially those who demonstrate leadership qualities.

The treasure chest of ideas, thoughts and dreams is ready to be opened every time you dialogue with creative people. Lift the lid, look inside, and grab a handful of innovative treasure!
at April 14, 2009 No comments: 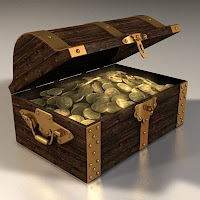 Where do you find your creativity? What stimulates your mind and heart to bring forth ideas? Where or who do you turn to for inspiration?

Sometimes the greatest ideas come from the simplest sources. Look around. What do you see? Listen. What do you hear? In your conversations, what is "striking a creative nerve" in you?

A few years ago I was asked to speak to a group of Youth Leaders. One of my topics was "101 Creative Ideas For Youth Ministry". I gave myself the challenge to come up with 101 new ideas to share. My goal was not to just share ideas, but to show that creative ideas can come to anyone, anywhere.

Here's what I did: I sat in my office, and using only what I had in my office (without reading some of my books full of creative ideas), I began to create a list of ideas. In just under two hours, I had 101 new ideas listed. I went back and wrote a brief description on how to use the idea to teach and minister to teenagers, and then I was ready.