No, this is not a "Year in Review" post. Nor is it a "what have I accomplished this year" post. Rather, it is about looking back at our footprints.

I hope you set out to accomplish many things (or at least something) in 2009. Just about all of do that each year. I think the popular term is "resolutions".

Sometimes it's a few personal goals, like losing weight or getting out of debt. Sometimes it's wider, like spending more time together as a family, or taking your business to the next level. At whatever plane, we begin each year with lofty (or not so lofty) goals. Hopefully we accomplish them.

As I review my 2009, I am not looking at the goals I accomplished (like recording and  releasing a CD of my songs, or expanding my Blog/Facebook/Twitter base). I am though, looking at the lives I have influenced. And that's where the footprints come in.

You see, footprints leave a mark. They blaze a trail. They lead the way. And the most important thing I could have done in 2009 is to have influenced others. Influenced them to succeed, to dream, to create, to fulfill their destiny.

And so I turn around from my journey, and look to see if I have left any footprints behind. But more importantly, seeing if anybody is following those footprints.

Untitled from Brad Lewis on Vimeo.

Are You Ready For Christmas? 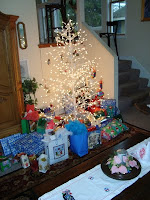 As I was walking from my car into my building this morning, one of my colleagues greeted me with the question, "Are you ready for Christmas?" My response was, "Yes, kind of..."

I began to think: How does one get ready for Christmas? Does that mean all of my shopping done? Does it mean that all of my travel plans have been made? Are all of my decorations up?

Maybe being ready for Christmas simply means making sure my heart is ready to celebrate the birthday of the Savior of the World. If that's the case, I believe I am ready!

Beginning on Sunday, December 13th I will be beginning a "Twelve Days of Christmas" video Blog. For those twelve days, I will be uploading a video-a-day of random Christmas memories that have shaped my life. I invite you to check each day for an update. And please, join the conversation on any of my Blog posts and leave me your comment. I will respond!
at December 09, 2009 No comments:

I once heard that leveraging your resources is one of the most effective ways of being successful. When it comes to creativity, I think that this is even more true. Here are some thoughts: 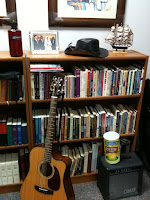 Your ability to be creative should never be limited to your tools, or lack of them. Remember, Adam gave names to all of the animals in the Garden of Eden. And he did it without even a fig leaf.
at December 02, 2009 No comments: