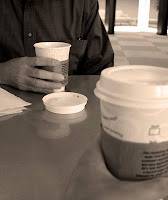 I don't know if I am becoming a Starbucks Snob, but I am finding that some of my best conversations are occurring over a cup of coffee, away from the office and away from the house. My work colleagues and I, my friends and I, my kids and I, even my wife and I seem to find the freedom to build community and go deeper in conversation when we're away from the familiar surroundings that "house" us for most of the hours in the day.

I guess Roy Oldenburg had me in mind when he argued for the Third Place in his book "The Great Good Place".

It really doesn't have to be the coffee or the Starbucks (although for me it seems to be there a lot - for convenience reasons, of course: there are a couple close to where I live and work; my daughter works at one, I have a Starbucks Gold Card, etc.). It really can be anyplace where we "get away". Sometimes the car becomes that place when I'm going somewhere with my kids or my wife. Sometimes it's at a restaurant. Sometimes it's as simple as a walk.

The key seems to be (for me anyway) that I am engaging in meaningful conversation in a neutral setting that lends itself to listening, creativity and trust.

And so I drink coffee with people. But more than that, I continue down the path of friendship, relationship and love, not knowing where that path will take me, but willing to take the risk of pressing forward, while I listen, share, and grow with those I am journeying with.
at June 30, 2009 6 comments:

This past Monday, at the height of the afternoon rush-hour, my son called to tell me he was stuck on the Washington DC Metro, in a stopped train, hearing rumors that there was a train accident up ahead. I immediately got in my car to drive into the District to pick him up, and as I drove I began to hear news reports on the radio of a disastrous scene unfolding. (My son's train was only a few hundred yards from the accident, and heading in that direction.)

As of this writing, there have been nine fatalities and 76 injuries, two of them being critical. I looked for this information on several websites, but because the news cycle was right at 24 hours old, it was difficult to find. I did however find many stories on the passing of Ed McMahon, entertainer, long-time Johnny Carson sidekick and Publisher's Clearing House check distributor. (Ironically, I was able to find the information about the Metro disaster on the Los Angeles Times website.)

This morning as I was driving into work, I was listening to WTOP, an all-news station in the Washington, DC area and most of the news was about Ed McMahon, rather than about the Metro disaster. A great entertainer dies and the country mourns. Nine people die and... well you get my point.

Interestingly, the same thing happened in 1997 when Princess Dianna and Mother Teresa died within five days of each other. The news coverage for a woman who literally lived in a king's palace went on and on. At the same time, a humble servant who lived among the poorest of the poor in Calcutta, India got barely a mention.

Who will remember the names of the victims in a month, or even next week? Will the inconvenience of a subway line being shut down while the investigation continues move people to compassion or just to complain? 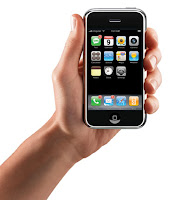 The highly anticipated software update for the iPhone is to be launched today. If you are not an iPhone user, than this means nothing to you. Of course you can go purchase one and join the millions of iPhone owners, the third generation hardware arriving on June 19th.

My son waited in line for several hours when the first iPhones hit the stores a couple of years ago (he was 22nd in line). He and my wife bought me one for Christmas the next year, and I have to admit that I am looking forward to the cool new features that the 3.0 software update will offer.

Has my life improved with my iPhone? I would say that I am more productive, information is more easily accessible and I really like the "Old Phone" ringtone. I don't have a bunch of game apps installed, but I do text regularly to keep up with my kids. But could I do that with a lower-tech device?

Allow me to move wider in my thoughts on technology and go beyond the iPhone.

Here's a question: Do we need the neatest and the newest to accomplish what we need to get done. I am not simply talking about our jobs here. What about our "purpose", that which we have been created for and called to do? I know that many who may read this post are probably too inward-focused to consider a "life purpose" (outside of getting the neatest and newest technology for themselves).

I am not against new technology. (I have been checking all day to see if the update has been released yet. I have it now!) But to be true to myself, I need to make sure that I am using technology to satisfy my purpose, rather than using it to satisfy me.

It Rained This Morning

It rained this morning. I woke up at 5:30 to start my day with rain. Lightning, thunder, the usual suspects accompanying a rain storm. Our over-saturated ground (translation: I haven't mowed my already-long grass for over a week now because of days of relentless rain in our region) wasn't thirsty, but my wife will be happy because she planted flowers yesterday.

Traffic was a bear as I drove my daughter to school, and then to one of the local Starbucks for a meeting. A lot of horn-honking, a surplus of impatience, an excess of unwise driving decisions. In Washington, DC, tempers flare, tolerance fades, and religion gets tossed into the back seat when it storms during morning rush hour. (Actually, without the rain those actions are commonplace.)

And to what end? People will eventually make it to their offices and jobs. Sure, meetings will need to be rescheduled. Of course explanations will need to be provided to bosses. Hopefully, apologies will be offered to friends and family members who saw us at our not-so-best. (I'm pretty sure I did OK until my daughter got out of the car. I'll check with her.) The bottom line: Armageddon is not the eventual outcome of a Tuesday morning rain storm.

Oh yes, some positive observations: There were some who allowed others to pull in front of them. A few half-hearted waves to say "thank-you" were offered. Some drivers slowed down near large puddles bordering bus stops. More than half of the drivers had their headlights on (OK, a pet-peeve...sorry). I even saw a car stop to offer another driver in a stalled car some help.

A rainbow after the storm? A silver lining to the raincloud? My car's cockpit became a front-row seat to sometimes the best, but more often the worst of our culture. I got thirty-seven minutes to watch a story unfold where the actors were real-life characters, the setting was authentic, not a Hollywood studio lot, and the script was well... not scripted (though predictable). And now I am Blogging about it.

I Am The Receptionist 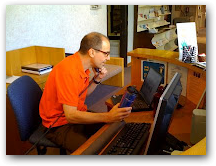 Today I am the receptionist at my organization where I work. All of the ladies on our staff are having a half-day retreat away from the office, and I volunteered to cover the phones, on-site visitors and the other responsibilities that our receptionist does.

I am a proven multi-tasker, so I don't mind the juggling of multiple phone calls, visitors and requests. I normally have a pleasant speaking voice and a smile, and I try to be helpful in all of my encounters with people, so the customer service aspect of the job isn't a challenge. I guess it is the intangibles that are causing me to experience a bit of a learning curve.

Case in point: A woman called and asked to be connected with "Barbara". We don't have a Barbara on staff, and when I responded with an unsure voice (we could have hired a Barbara since I left the office yesterday), the caller realized she needed to give me more information. "She has a nice haircut," was her next statement. Hmmmm. Again I went blank. Then the caller described where Barbara sat in our worship services. Adding that information to the nice haircut clue, I deduced a name. "That's her!" the caller exclaimed. Whew!

Well that was a first for me (not the amateur detective work in locating a person's identity, but the nice haircut clue). And now if I am ever tasked with identifying a person having only the same small bit of information, I feel I will be able to identify a mystery person more readily.

Actually I doubt it.

Question: What experiences have you had that give you a new poerspective on what others do? Share your thoughts below in comments.