There's a commercial on TV for Traveler's Insurance depicting a man with constructed "wings" standing at the top of an old stone bridge that crosses a wide river outside a small village. The entire town is out to see this feat, wondering if the man will succeed in flying.

He stands on the precipice summoning his courage, looking out over the river from his height at the center of the bridge. Finally, he spreads his "wings" and jumps out over the water. The wings catch the air and he begins to soar.

In astonishment, one of the towns-people exclaims, "He can fly!" Just then he loses altitude and crashes into the river.

An old man looks at the scene and responds, "But he can't swim."

It's like that for us sometimes. We try something new and courageous, and just when we think we've "got it", we "fall into the water" and are faced with new challenges. Most of us want to simply give up and quit trying.

I say let's learn to swim.

A new TV show this fall on NBC is about a group of ordinary people who possess extraordinary abilities. As I understand the direction of the story, they will unite together and use their unique gifts to save the world. Interesting but over-worn premise (Remember the Justice League and Independence Day - the movie?).

The characters are very interesting. There's a high school cheerleader who instantly heals after suffering various kinds of severe injuries, a cop who can read people's minds, a heroin addict who paints pictures of the future, a couple of flying brothers, a web-cam actress with a violent alter-ego and a Japanese office drone who can teleport.

Simply put, it is a random assortment of normal people who are poised to do something extraordinary.

The popularity of the show after five weeks may say a lot about our culture and our desire to have heroes or perhaps be a hero. Whether the show can sustain itself with the current storyline and characters is yet to be seen. But beyond ratings and viewer-ship, perhaps something is being said here.

In a nation where heroes are few and far between, where members of our military are being accused of crimes, where sports figures are known by how much money they make, and entertainers and who they have babies with are the biggest news stories, people are crying out for heroes. Who can we trust? Who can we look to? Who can we depend on?

I suggest looking no further than at yourself. I propose that you be the hero. I say you be the one who comes to the rescue.

How can you be the hero? Simple: encourage someone. Hold the door open. Be kind. Squat down to a child's eye-level and talk to them. go out of your way for someone else. Make someone feel good about themselves. Now that's a hero! 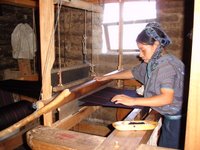 I wonder how many poets are in that 300,000,000. Or how about musicians or authors or artists? Do you think the number of artists, composers and writers rises in proportion to the population of the ? Is our country becoming more creative? Has the popularity of YouTube.com and other similar sites encouraged more people to become "creators", of has it simply given creators a venue in which to demonstrate their works?

My wife was in our basement painting (a picture, not a wall) last evening. Her picture of a hummingbird drinking from a flower was in my opinion, brilliant. Her response to me when I told her that was, "I don't care if it's good or not. I enjoy painting." Now that is what creativity is all about.

This morning I stood in the Pediatric Intensive Care Unit at one of our large hospitals next to the bed of the soon-to-be-three-year-old daughter of one of our church's families. Her parents and I stood around the girl's quiet body as she lay connected to a breathing tube and an IV. She needed to be sedated to assure that her breathing tube stayed intact. The doctors are stumped on what has stricken her.

I held hands with her parents and laid my hand on the girl, crying out for the Lord to heal her. As I prayed, I was reminded of the story in Luke 8 of Jairus, whose daughter needed a touch from the Lord. The Lord touched the girl in Luke 8. This gave me faith, and as I prayed this story I believe that the parents were encouraged in their faith.

We prayed for life for the girl! We spoke life over the girl! We passionately cried out to the Lord to give this young girl life! And we believe that life was filling her and removing the mysterious sickness that gripped her.

But are they truly unrelated? I am not suggesting "conspiracy theory", but I am suggesting that our world is sick, and this "sickness" has manifested itself once again in the form of fatal violence on school campuses.

Listen to this: Since 1999, 219 deaths have occurred in our schools. Now that should bother us. But are we bothered enough to do more than simply curse the darkness, saying this is an awful, twisted world that we live in?

May I offer that we could seek to change our world. We who believe in Christ carry a message of hope. We who have life can do little things to dispense that life. We who are well can seek to reverse the "sickness".

How? Simple: Invest in somebody. That's a great start.