There's a story in the Bible about four lepers who were in a bad situation, but through a little creativity and boldness, they were able to improve their circumstances beyond their wildest dreams.

The city where they lived was under siege by their enemies, and a great famine ensued. All of the inhabitants of the city were affected, especially the lepers who pretty-much had to beg for everything they got. The four of them got to talking to each other one day, and they made the collective decision to leave the city, go to the camp of the enemy, and beg for food from them (who had an abundance of food, drink, clothing, and other assorted "stuff").

Well an interesting thing happened. The Lord God made the enemies who were camping outside the city hear the sound of a great army of horses and chariots, and they thought it was the allies of the city residents coming to rescue them. They literally ran away and left everything behind, even stripping off extra clothing as they ran so they could run away even fraster.

The four lepers of our story found the abandoned campground and after checking out a few of the tents, found that they had stumbled upon a mega-powerball-sized jackpot. Food, drink, clothing, silver, and gold were all left behind by the scared enemies. The four lepers began to eat and drink all that they wanted, and then to gather the riches and stockpile them for themselves for later use.

There is more to this story, but for the purposes of this Blog post, allow me to state that looking outside of a seemingly impossible problem or situation may produce the solution or answers you are seeking. Add to that a little boldness to move beyond the familiar and comfortable, and you are setting the stage for a huge breakthrough.

Having some faith in the Lord God completes the package.

Question: What difficult or impossible situation are you facing that may need you to look outside for an answer, to look inside for some boldness, and to have the faith to look heavenward for help?
at January 27, 2010 4 comments: 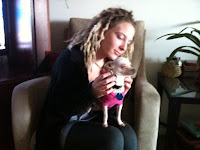 My daughter (my youngest child, the only girl, very much still has me wrapped around her little finger) got a Chihuahua on Saturday. She has been looking for a dog for the past few months, one that would complement her lifestyle, and had settled on a very small dog (my daughter is only 5'1"). So a Chihuahua is perfect!

Jack-Jack is a one-year-old, purebred, AKC registered, fully grown, 4 lb. Chihuahua with a paid-up health insurance and dental plan. We got him for a steal (no, we did not steal him). He already had the name "Jack", and my daughter re-named him Jack-Jack (I'm still not sure why - maybe in case he misses his name the first time he is called).

My daughter and Jack-Jack bonded immediately. I am no expert, but I understand Chihuahuas are very territorial, and very selective in relationships (don't we wish our children were the same way?). He immediately jumped into her lap and allowed her to pet him. He responded with the complimentary face-lick for my daughter (she refused to lick him back). Still, both seemed happy.

Our home is already different since Jack-Jack moved in. I have to watch where I walk (I weigh 153 lbs, Jack-Jack weighs only 4 lbs. It wouldn't be pretty if I stepped on him, and I would end up getting punished). I have already baby-sat for Jack-Jack (three times, and it's only Tuesday), so my "running around" has been severely curtailed. (Although Jack-Jack does love to go for a ride in the car, and behaves himself very well while traveling.)

Some advantages to having a very small dog: Jack-Jack doesn't eat much, so dog food shouldn't cause me to have to cut the internet to our house in order to pay for his food. If he gets in my recliner while I'm sitting in it, I can put my MacBook Pro in my lap and there is still room for him to lay on my legs. Finally, when he is walked on public grassy areas, sometimes I can't find his "business" so I don't have to collect and dispose (I honestly do search...).

Now, what does this have to do with creativity? Well, any change (even small, 4 lb. ones) cause us to become creative. We can't continue to live the way we used to before the change, without incurring consequences. New territory requires new strategy. Change demands innovation. And a Chihuahua can rule the house...

Question: What changes in your life have caused you to become creative? 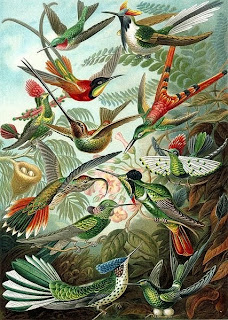 My wife and I were watching a PBS program on hummingbirds the other day. I was intrigued by the facts that were presented: about migration (some species more than 5,000 miles a year), about number of times they flapped their wings (12-90 times per second), and about weight (Bee Hummingbird: .07 ounces).

Most of all I was impressed by the iridescent colors of their feathers. (My, do I sound like a simple 'bird watcher', as opposed to the 'expert birder' that my wife is? - "Hey Elaine, look at them pretty feathers!")

As I watched the show, I was struck with a thought:

Even on one of the smallest of creatures, God leaves His fingerprints.

Each species of hummingbird was unique in its color and beauty. Each had their own unique mannerisms and habits. And each one reminded me that God creates life and sustains life.

So I conclude that there is beauty in even the smallest of things. (Even if it's them pretty feathers.) All created things bear the marks of their Creator. Even you.

I was thinking earlier today about that which keeps us from being creative. I believe that there are many obstacles to creativity, but I wanted to narrow it down to something all of us could identify with. Here's what I came up with:

Complacency is the enemy of creativity. We should constantly ask ourselves, "How can I do and be better?"

Now I know that it is very simplistic of me to state that all lack of creativity stems from complacency. I mean, who am I to make such a sweeping statement that tries to cover all of the reasons for not being creative?

I can remember as a 12 year old spending hours "tinkering" with my Dad's tools trying to make something that would cut weeds around fence posts easier. (I could have been the inventor of the weed-eater if my Mom hadn't made me go outside and get working on the weeds with the hand clippers!). Maybe I was simply motivated by the desire to get chores finished quickly.

When I consider artists and musicians, writers and poets, I venture to say that they create because they aren't satisfied with what was created before them, by others and even themselves. (I think of myself as a songwriter and find that I am motivated to write a song many times because I don't know of one that says what I'm wanting to say just right.)

When I think of engineers and architects, I have to assume that they are looking for a better, smoother, faster, more efficient way to do something.

And then I have to consider those who create just for the sake of creating, who can't help themselves but to create. Hmmmm... Could it be that there is something inside of them that pushes out and makes them be creative? (Could it be the nature of The Creator that all of us have been made in the image of?)

Well, that is how I feel: Complacency is the enemy of creativity.