I used to think that creativity was reserved for the select few. You know, the artists, the authors, the songwriters. But then I began to see that all of us were given the gift of creativity.

If I am made in God's image, then I too am a creator. And so are you.

But you may be saying, "I can't write, I can't paint, I can't create anything." Try not to limit creativity to works of art, literature or music. Instead, think of creativity as looking at the challenges, opportunities and even the mundane tasks of life from a new perspective.

This could mean finding a different way to make your family's favorite meal. Or perhaps expressing your love for your spouse in a new and fresh way. Even rearranging the furniture in a corner of your home is creativity.

Don't limit yourself to what you can or cannot do. At every opportunity ask this question: How can I do this better, different or more uniquely? Now go ahead and create!

Question: What can you do to be the "creative" you were designed to be? Share below in responses.

In Lewis B. Smedes book "A Pretty Good Person," Smedes recounts a story of a man named Fopke.

Fopke was decidedly un-passionate. In fact, he was convinced that the entire village he lived in "despised him and thought he was a ridiculous person" because of his glum and simple existence.

He decided that by himself, he would prove after all that he was a superior person, a person to be reckoned with, a person of great power of will and courage of heart.

He purchased a cheap pistol and loaded it with a single bullet. Thinking he would look more gallant in the eyes of his fellow villagers, he also got a bottle of Dutch Scotch with plans to drink a glass and then shoot himself. With his loaded pistol before him, he proceeded to pour himself a glass and drink it, but then fell asleep.

While sleeping he dreamed that he went to a far away land where the people were kind, trusting and respectful, not only to him but also to each other. Inquiring about this “goodness”, Fopke found that the people only understood concepts of good and virtue, but had no frame of reference of bad and evil. So he told them about evil and how men acted towards one another.

The people were intrigued by these stories and soon they only talked about the good verses evil concept that Fopke introduced. Soon people began to “try” evil and unkind things like lying, stealing and hurting others. Fopke was deeply disturbed that he had introduced evil ideas to this good and kind people and tried to stop it. But it was too late.

Fopke awoke with a different perspective, a new vision. He determined that he would seek to be good in everything he did. He purposed to quietly be friendly, to do kind deeds and to share goodness everywhere he went.

Noticing the change that came over Fopke, the people of his village asked him to teach them how he became a good person. He responded by saying, “I cannot talk about it. And please do not call me good. Only God is good. I am only on the Way.”

On his grave stone standing atop a modest grave on the are inscribed these words, “Fopke fen Faken, Alles meirekkene, in ridlik geode minske." Which, translated means: All things considered, a pretty good person.

What dreams do you have that impassion your life? Please respond below. 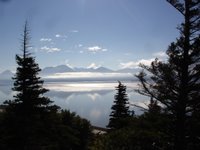 I have been around for a few years. I have seen a few things. But nothing could have prepared me for the majesty and wonder my wife and I saw during our trip to and then . We were very taken back by God's "hugeness".

In all of creation, we see God's mighty hand: in the ocean, in the mountains, in the heavens, in ourselves.

And then to think that in all of God's bigness and in all of the great things that he does, He still has time for me. And for you.