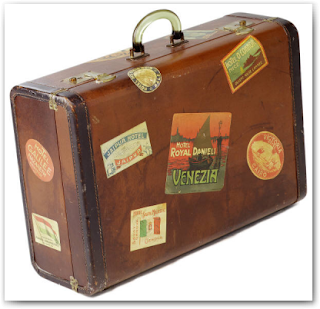 This makes for a complicated situation with our suitcases. We need to make sure that all of us have adequate suitcase space for our respective trips. And so a bit of creative suitcase juggling is going on at Catamaran Manor (our home).

Suitcases are an interesting thing. The first known suitcase made its maiden voyage in 1897. Since then there have been many suitcase developments.

(There is even the vintage Fender Rhodes 73 MK 1 Suitcase Electric Piano, named that way because the entire instrument packs up as a suitcase for easy transport between gigs.)

We fill them, weigh them, measure them, carry them, pull them, stow them overhead, and live out of them.


Yes, for those who travel the suitcase is a necessity.

Similarly, our minds are like suitcases. They carry our ideas, our imaginations, our solutions, and our dreams.

They come in different sizes and configurations. Some are soft, while others are strong. Some have a large capacity. Others hold very little. Some are weathered and worn. Others are kept in the closet and hardly used.

How do you 'pack' your mind? Do you fill it with valuables? Do you only hold 'fluff'? Do you stuff yours full, continually adding more and more?

Question: What type of suitcase would you compare your mind to? Share your thoughts below in 'comments'. 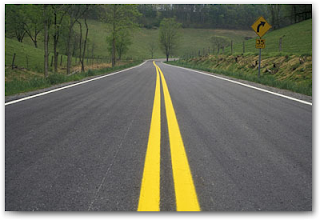 As I was driving home yesterday evening after work, I saw the evidence where a vehicle had run off the road and crashed into a wooden fence. A nice, clean "front-end-sized" hole had been punched through the barrier, but it appeared to be a drive-away situation where no one was hurt.

I reflected on the scene as I continued to drive, and the phrase between the lines crossed my mind. It was obvious that the driver of the previously mentioned vehicle did not stay between the lines.

In the not so distant past another phrase was making the rounds as a description of creativity (as an alternative to the overused phrase out-of-the-box): Outside the lines. As in "he colors outside the lines".

Why I thought of the phrase between the lines was this: The driver had not stayed there. Rather, he (or she) had strayed from the imaginary protection of the painted lines on the asphalt and ventured into unsafe territory.

As in this case, sometimes it's okay (or even better) to stay between the lines.

In sports, straying outside the lines has different consequences: In football, the play is over and the ball is spotted at the point of crossing. In basketball, possession is forfeited. In baseball, the ball becomes foul instead of fair. In track, disqualification.

What about in creating?

Pure creativity has to begin somewhere. I believe it starts between the lines, and then evolves. In music, a melody or a chord. In painting, colors and canvas. In writing, words and phrases.

Question: Can a person be creative and stay between the lines? Share your thoughts below in 'comments'.

Go With What You Know 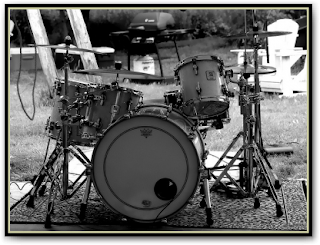 A few years ago I was visiting at the home a member of our Worship Ministry where I was the Worship Arts Pastor. Antonio Acevedo was one of our bass players, and he had invited me to a gathering of the Hispanic Ministry, where he and his wife were on the leadership team.

More than 70 people were eating and enjoying conversations in their backyard, and Spanish was the language of choice for the afternoon. As I looked around at the assembled crowd, I realized that I was the only Gringo of the gathering.

The menu was Puerto Rican, Guatemalan, and Salvadorian. The food was fabulous, the laughter was loud, and the sharing of stories was superb. (At least I assumed that stories were being shared. Remember, everything was in Spanish...)

As the afternoon began to move towards evening, "Tony" got together an impromptu band to lead the people in the singing of some worship songs. Tony chose to play the guitar, and a drummer, percussionist and another guitar player rounded out the group. A bass player was needed, and I was drafted.

As all musicians know that it is difficult to refuse a gig, I quickly agreed to jump in. Donning Tony's bass guitar, we tuned up and got ready to play. Tony told me that we were going to play Hispanic worship songs that I probably wasn't familiar with, but not to worry: He would call out the chords to me as we played.

Tony kept his word and turned towards me at the beginning of each phrase and called out the chords. But there was a problem: He was calling out the chords in Spanish!

Now I know a handful of words and phrases in Spanish, but the alphabet is not held in that hand. I found myself needing a solution on the fly.

Instead of feeling frustrated or lost, my creativity kicked in. I found myself relying on my musical ear to follow and anticipate the chord changes, rather than my physical ear to hear Tony calling out what chords to play.

The music flowed, the people sang, and the worship was rich. My experience and creativity was put to the test, and I was able to hang in with the band.

Not only did I survive the foreign language musical experience, I was invited back to play for the Hispanic Ministry's next gathering. Whew!

All of us find ourselves in situations where the available resources are inadequate, and we don't have the luxury of proper preparation to accomplish our task. You will be forced to go with what you know. Don't be strangled by those situations, but rather embrace the task and rely on your experience and creativity to propel you through.

Question: When have you been required to go with what you know? Share your thoughts below in 'comments'.

Running On Someone Else's Beach 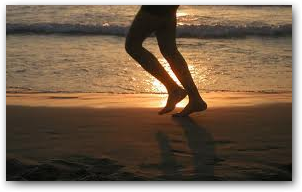 One morning in February 2007, I was out for a run along the beach. It wasn't the Gulf of Mexico, but rather the Indian Ocean on the southeast coast of India.

Just two years before, the great Christmas Tsunami had ravaged the coastline of this part of India, bringing unimaginable devastation to the town of Mahabalipuram.


As the miles and the coastal fishing villages passed by me, the signs were evident everywhere: Empty shells of buildings, water lines over 12 feet up the trunks of palm trees, and bare foundations where homes once stood. It was was sobering to even the most optimistic of people.


The devastation and destruction were great, but life continued. Boats were repaired, nets were mended, and fishermen engaged in their generations-old practice of challenging the sea for their sustenance.


What I learned later was this: The fishermen weren't the only ones who suffered at the hands of the Christmas Tsunami. It was the farmers who had an even greater challenge because the seawater pushed inland, in some places for miles, effectively poisoning the fertile farmland for years.


Bare brown land was all that was visible, but to the farmers who depended on that same land, they saw the end of life.


Media coverage of the Tsunami devastation was focused on resorts and places of wealth. Most of the news reports were limited to westerners who had their vacations interrupted.

I did not hear about the fishing village devastation from the media. I had to experience it firsthand as I ran along the beach. The farming losses were not visible to me, but were only brought to my attention by the locals. Had I not been there, I would have remained ignorant of the real plight of the people there.

What can I bring to us from this story:

Question: What have you seen as you have run on someone else's beach? Share your thoughts below in 'comments'.