We had an excellent crusade meeting last night, where Pastor Daniel and myself preached to an even larger crowd than the first night. At the altar call, once again, hundreds came forward to receive Christ!

At the very back of the grounds, there were two policemen "stationed", my guess to protect me. One was a Muslim man, the other was a Sikh, a vast religion in this region of India. Pastor Daniel and I agreed to target them as we spoke. I immediately began to build bridges by publicly honoring them as I began my message. I continued to refer to the importance of the police in our lives throughout my talk, and when closing down my word on the need for all to receive the salvation of Jesus, I said that, "... all people, drivers, doctors, housewives and policemen need Jesus."

The altar call was announced, but no police came forward. Well, after the public prayer was spoken for the people to commit their lives to Christ, something interesting happened. The team was leaving the compound, and the policemen came forward straight to us."Here they come," Pastor Daniel spoke to me, and when they got close they continually shook our hands, saying "thank you" over and over. 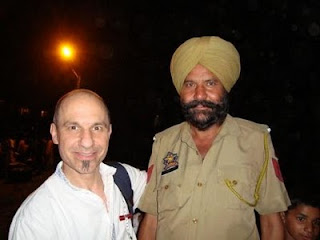 A smile like I have never seen before on the stoic India police covered the Sikh man's face. He and the other policeman stayed with us, shaking my hand and "escorting" us the 400 meters to the car. I believe that both of the men received Christ that night, simply by their response to us after the service was over.

Today, I spoke and encouraged the people of one of the churches who sponsored the crusade. They assembled at the crusade grounds, and with the clunk-clunk-clunk of an old portable generator thirty feet away from the stage, and 106 degree temperatures even under the covering, I encouraged the people and the visiting pastors with a word from the life of Paul the apostle.

It was what happened before my message that I want to highlight: There was a time of testimonies, and four people spoke. Aided by a translator, I learned from a woman that she had attended the first night of the crusade and heard my word on the woman who had a sickness for 12 years.

She related that she also had been sick for several years, and when I had told the people that like the woman we need to reach out to Jesus, she said she began to pray and reach out to Him. Immediately, she said, her pain began to subside, and her body felt lighter. She also related that not only did her body feel at peace, but her spirit and soul did also. All that she had been worrying about seemed to go away, she said, and she felt "very close to God."

Once again, I was humbled by the presence of God, and of hearing what He was doing in the lives of people who need a touch from Him. I am in awe of His love, and that He allows me to be a part of what He is doing.