Last night was an exciting night, both spiritually and physically. The final evening of our crusade brought well over 1,000 attendees to the crusade grounds. The worship was passionate, the people were excited, and the atmosphere was electric (literally)!

Before I brought a message, Pastor Daniel and I had the privilege of ordaining seven local pastors to the ministry. What an honor it was to lay hands on and pray for these humble Indian men, men who were already out on the front lines of ministry, seeking to bring the Hindu, Islamic and Sikh people of Jammu to Christ.

During the ordination ceremony, the winds began to pick up and blow through the humble crusade grounds. The grounds were a 60 x 70 meter field, fully enclosed on all sides by three-story buildings. The only access is a narrow passageway between two of the buildings.

I began to speak, telling the people of my conversion to Christ, and seeking to artfully weave the Gospel into my testimony. All through my speaking, the winds continued to grow, and it was obvious that a storm was brewing.

Just as I said, "Let me tell you what faith is," the power went out and we were stranded in litterally utter darkness, as the walls of the buildings shield the field from any outside light. With no PA system to speak to the people, we waited while some of the crusade team worked by "cell phone light" to get the ancient diesel generator started. Finally, the generator was started, the lights and sound system were connected, and we resumed.

I was able to explain what faith was, and the need for all people to commit their lives to Christ, and to Christ alone. The wind continued to blow, the "tent" over the stage began to lift up from the ground (the poles came 4-5 feet off the ground!), and vortexes of dust, sand and debris swirled around the people who were doing the best they could to shield themselves from the dust. I have been in enough hurricanes to know that the wind must have been gusting up to 60 mph inside the field.

It was literally a chaotic scene as the tent was being taken down, people were scattering everywhere, and organizers were trying to keep some sense of order in the random periods of light and darkness, using an intermittent sound system.

Needless to say, the evening was over. We weren't discouraged though, The Gospel was proclaimed, people were challenged in their faith, and seven ordinations marked the evening. It was a sight though! 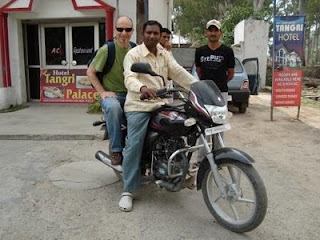 The "Motorcycle Pastor" rides again! As I write this, it is Monday, approximately 3:30 pm, and I am in Kathua, close to the Kashmir-Punjab border. We left Jammu this morning, traveled two hours by SUV and conducted a medical camp here. The local pastor was kind enough to take me to an internet cafe, and his mode of transportation was a motorcycle. I love it!

Tonight we travel by train into Punjab, have a day off, and then resume our medical camps and crusade activity. India and adventure seem to go hand-in-hand for me!
at April 19, 2010

Thanks for sharing Pastor Brad. Be strong in the Lord and never Give up !!! Thanks for the respect you have shown to the country by not taking any photos.

Even though I am indian and know about the power cuts and extremities ...I am still amazed reading this post . Thank God that everyone is safe and for the revival.

Thank you Sucharitha. The Lord is blessing. All is good!