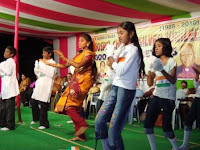 Friday evening we were treated to an authentic Indian dance performed to genuine Indian music by some of the children of Ecclesia Ministries. It was great to see the children display their culture, and the result of weeks of preparation. We were blessed!

Pastor Charles and I both preached evangelistic messages, and when the altar call was given about 200 people responded to the call to salvation. We led them in prayer and rejoiced as they began new lives! Following that we prayed for sick people. It was a great night! 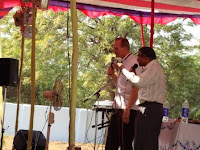 This morning at the Bible Conference, Pastor Charles, Pastor Kumar (who is the main translator), and I all brought messages of hope and faith to a gathered crowd of over 3,000. What a privelege to be able to speak words of truth and life to a hungry people. 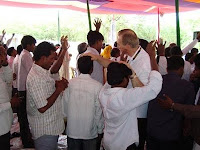 After the teaching time, we were ready to move into a time of prayer. The crowd was too large to invite people onto the stage and lay hands on each one, so Pastor Charles and I walked through the crowd laying hands as went. With worship going on as we prayed, he task took over 30 minutes, and when we were finished, we invited people who have received healing to come to the stage and testify.

Over 200 people came up and shared one by one how the Lord touched them. We recorded three people who received sight after living in blindness (pictured is one lady), and scores of others who were instantly healed from various pains, fevers and diseases. A lady (different from the other day) brought her two-month-old baby on the stage and testified that she was prayed for by me last year after being barren for many years, and now she has a child!

This picture is of a lady holding her baby with a tumor on its hip the size of a grape. I had prayed for the child two nights ago when the tumor was the size of an egg (I saw it). I am believing that by the end of the weekend the tumor will be nonexistent!

Tonight is the final night of the crusade. We are believing that many will be saved and many will be healed. This is the India I love!
at February 13, 2010

Much happening, Brad. Hope you are holding up. I know you will hit the finish line strong!

Once again Brad, it is a blessing to see the Lord work through you to spread His Word and power.

Blessings on the rest of your trip.

Thanks Phil and Paul! the Lord is good. I'm holding up, but will be happy to head for home very early on Monday morning. Thanks for following!