As my family and friends in the DC area try to dig themselves out from under a historic snowstorm, I had the privilege of speaking at the Sunday morning worship service of Ecclesia Ministries in Kazipet, Andhra Pradesh, India. I feel bad that I am not with my family to help them dig out, but I am here (with their blessing of course).

Ecclesia Ministries, under the leadership of Pastor Daniel Kalyanapu is celebrating 25 years of ministry this week, and I was called upon to deliver the first message of the week-long celebration. I felt led to speak about the four lepers in II Kings 7, who when expecting to die because of a famine in their city (they were under siege from the Armenian army), went to the camp of the enemy hoping to be spared and given some food. 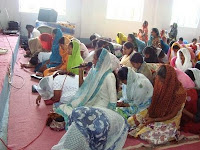 What they found was a deserted camp because the Lord God had caused all of the Armenians to flee, leaving a camp full of food, clothing, silver and gold. The four lepers ate, drank and hid for themselves the silver and gold found in the first tent they opened. They went to the second tent and did the same thing.

Realizing that all of the tents contained the same food and riches, they said to each other, "What we are doing is not right." Choosing to do the right thing, they went and told the city officials of their discovery, and thus the city was saved. 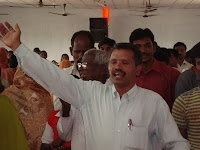 I challenged the members of the church to not sit back and enjoy the blessings of the 25 years of successful ministry, but rather continue to share what they have, the good news of Jesus Christ.

I believe that the Lord has even greater things in store for the many thousands of people who call themselves part of Ecclesia Ministries. If it takes four lepers to teach us how to share what we have with others, that's OK with me.

Question: What are you sharing with others?
at February 07, 2010

Incredible NOW word, Brad!! I pray God do a creative miracle thru you..something that has never happened before, in Jesus' name. Expect it, Shelia

Great start. Brad. Looking forward to God will do on ur trip!

Thanks Phil! It started good, but will only get better. Talk to you soon!