They came by bus, by car, by taxi, by motorcycle and on foot. Approximately 200 people packed inside a rented "hall" for the Second Sunday Crusade meeting in Hyderabad. As the worship team sang, even more people arrived, having heard the music. 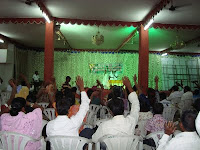 Teaming up with Pastor Daniel as my interpreter and official "altar call giver", we spoke the Word of God and challenged the half-Christian, half-Hindu crowd to give themselves fully to Jesus, who could meet all their needs, heal all their hurts and forgive all their sins.

Almost all the people present responded to the altar call, and many received Christ for the first time. As testimonies were shared on the microphone, people spoke of finding Jesus, and of healing.

This woman came to the meeting barely able to hear (I believe she was sitting directly in front of the speakers so she could make out what was being said), but after we prayed for her she testified that now she could hear clearly! Others spoke of pains being relieved. And person after person declared that they committed their lives to Jesus!

Even the Hindu manager of the "hall" heard the message from his office, and came asking for prayer, as he is seeking Christ.

It was truly a fruitful meeting, and well worth the three-hour-each-way journey for our team to participate.

This morning I again had the priveledge of teaching at the Bible School, and challenging the students in their calling and commitment.

Tomorrow we board the train for Kadapa, where we will conduct a three-day crusade in the hometown of the recently deceased Chief Minister of Andhra Pradesh. We are believing for a great time of ministry in this still-grieving city. I will try to update this Blog as often as I can, but may be "offline" for a few days. Pray for the team!
at October 12, 2009