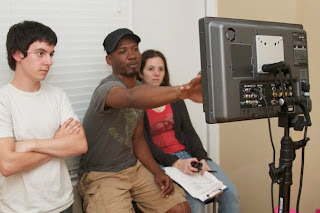 I know of a couple of guys and a gal who are doing just that. Their company is called C&I Studios, and as a film and video production company, they are seeking to be a positive voice in their world. Here's what they say:


Film is such a powerful force, and right now its being used mostly for pointless entertainment.
Our studio is venturing out against the grain to change that. We believe that film can be used
to educate, empower and inspire individuals to greatness.  C&I Studios is a Non-Profit film studio, so all of our films are about life and how to truly live it.  Our films also venture out to create social change and awareness throughout the world, with the use of professional media.


Question: What are you doing to capture and change your culture by using your creative ideas, gifts and skills?

i really enjoy all your posting way, very charming,
don't give up as well as keep creating because it simply just very well worth to read it.
impatient to find out a whole lot more of your current well written articles, regards!