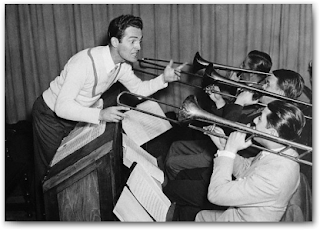 Many times I have been asked about a good way to manage creatives. Anyone who works with people knows that working with a group of creatives is like trying to pilot a ship with sails, engines, and six rudders. The resources are there to capture the wind, to produce power, and to go in six different directions... at the same time!
Let me first say that I shy away from the term manage, but rather adopt the term lead. Managers oversee projects, leaders develop people. Even if your title has the word manager in it, you can still be a leader. It's how you view your role: bottom lines or better people.
Most of my experience in leading creatives is in the music world. Here is a place where creativity and artistry abound. So does individuality and pride.

I understand the mind and heart of a musician-creative, because I am one. For over 30 years I have personally navigated the tension that is produced when a creative works with other creatives. Each has their idea, style, and concept, and most think theirs is the best.

As a  leader-creative, the tension is even greater because my own energies are seeking an audience, while at the same time my leadership heart is desiring to allow others to reach their full potential. This can become powerfully destructive, or powerfully creative.

Here are some things that I have learned in working with creatives:

Leading creatives is much more challenging and involved that simply managing a project. But the results in terms of personal growth, project excellence, and character development are well worth the investment in the creatives we lead.
Question: How have you navigated the delegate world of leading creatives? Share your thoughts below in comments.
If you like this post, you can re-post, put it on your Facebook status, or forward it to your friends. Follow me on Twitter @bigcloudmusic if you find me interesting. Subscribe to this Blog if you'd like.
at November 15, 2011