Where The Wind Blows 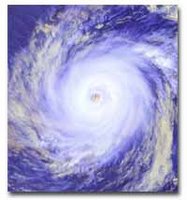 I noticed on Fox News this morning that a meteorologist was seeking to explain why the 2006 hurricane season wasn't as bad as predicted. Normally I keep the sound off so I don't know what his reasons were (I multi-task in the morning and only read the banners).

One banner stated that only one storm made it into the (which was a fear of many, based on the Katrina and Rita-led 2005 storm season). I found all of this interesting, if only in passing.

I was reminded of the words of Jesus when asked by Nicodemus about being born again. Jesus said, "The wind blows wherever it pleases. You hear its sound, but you cannot tell where it comes from or where it is going..." Hmmmm. Sounds like hurricane season.

I began to ponder this and thought about creativity. We can try to predict when a creative thought will come. We can even do things to encourage creativity. But the bottom line is this: We don't know when a creative idea will come or how it will show itself. But we need to be ready for it when it does.

So if that means keeping a paper and pen on the nightstand, or a digital recorder in your bag, or a sketch pad handy, be ready for the next great creative thought that comes your way. Who knows, it may be "hurricane-size" and blow you away!