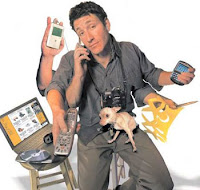 Here are some interesting facts from a Stanford University study published in the August 24, 2009 edition of the Precedings of the National Academy of Sciences:
(Allow me to confess that I am multitasking as I write this Blog. Brain damage!)

Although you may be a multitasker, may I ask if you are the most effective, and most productive when multitasking? When you sit down to work, study or create, do you feel the most comfortable when you have a few things going on? Have you ever tried to do a singular task?

I offer that we were created by the Creator, so we can be creative. And to accomplish this, sometimes we need to turn off a few devices and close a few folders, and focus on one thing.  That's how God created: one focus per day.
at September 23, 2009

Interesting. And thinking of my own life I see how this can be true. However, I must say that with 3 children and 1 on the way multitasking is a must in order to be productive in many areas of my daily life. With a toddler and 2 homeschooled children multitasking is survival on many levels. All though at the end of the day I have experienced the "brain damage". But for me to be creative or accomplish personal feats, not being able to focus solely on the project before me, is at times disastrous. So with out the ability to do both I would be ineffective and non-productive.

Mistica-
Please remember that I don't have your perspective: a mother, who has a toddler, who homeschools and is expecting! With all that you do, instead of brain damage, you are getting a medal!

Stay strong. Do what is necessary now. This season of your life, though stressful, is rewarding. But know that it gets better!