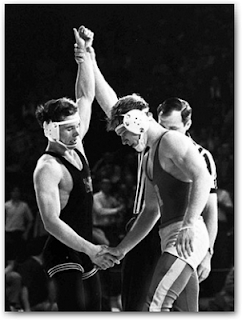 We've all heard it, most of us have said it: I was robbed! We had to beat the refs too! It wasn't fair! A bad call cost us the game!

Whatever form that it takes, using whatever words are chosen, the message is the same: It wasn't fair.

I learned something early in my journey: Life is not fair. Expecting an even playing field for all of my challenges, weather in school, sports, business, ministry, or relationships is unreasonable.

I remember the first wrestling match of my senior year of high school. Our coach didn't schedule any matches during the first month of the season, and then once we started we usually had three matches a week. His philosophy: train for an extra month, then once we began against opponents go strong and relentlessly through the season.

My opponent for that first match had a 5-0 record, all of them pins. I knew that my work was cut out for me. As I watched the four bouts before mine, I noticed that the referee was not being kind to our team. Marginal calls went against us. Points weren't given to us when due. There was a lot of complaining from our bench.

I surmised that I now had two opponents to defeat: my adversary across the mat, and the referee. I remember telling myself that I needed to be better than I was. There would be no complaining, there would be no excuses. I was determined to win, but if I lost it was not because of the officiating. I had to Win Twice.

(Disclaimer: It is not for bragging purposes that I share the result. It simply closes the story.) I won, soundly: 10-0. There was no pin - which in my opinion should have been called for me. I even said to the ref, "There it is Ref, there it is!" To which he replied, "I call the match young man, you be quiet.")

This is a determination that all of us should take to every challenge we face. We should never complain about circumstances for not achieving what we believe we are supposed to achieve. We should not point fingers and assign blame. Rather, we should become better than we need to be.

I believe that inside of each of us is the creativity, capacity, and character to rise above the circumstances surrounding us that seem to magnify our challenges. Think of a better idea. Work a little harder. Don't look for the easy way out. Some ideas:
For many people, bragging rights and making excuses after a game makes for heated yet non-productive conversation. In life, let's let our actions, accomplishments, and character speak for themselves.

Question: What have you done to rise above circumstances and Win Twice? Share your thoughts below in comments.